Each year we celebrate the 4th of July by going camping with a group of family and friends – all together about 20 people. This year my sister suggested that we break up into 2 groups and each group would be responsible for planning and preparing breakfast for one morning. We all agreed that it was a good idea. What we forgot was that in this group of friends and family anything that requires breaking into groups means competition.

It started out innocently enough, my group decided on waffles with fresh fruit and breakfast meat. The other group was making pancakes, breakfast meat and eggs. The first morning was my team’s turn I woke up early with plans to go for a walk then start on breakfast. I noticed that my friend and teammate Barb was up too so we decided to get the breakfast started by cutting up the fruit. As we were cutting we realized that we didn’t have a large bowl to hold the fruit – being resourceful we decided to use the watermelon as our bowl.  And that was the moment that the competition began. 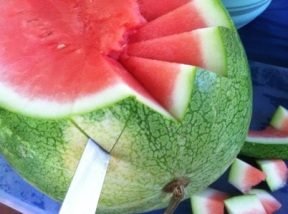 TEAM A
I gleefully began cutting the melon as Barb and I laughed about how the other team would never be able to compete with our wonderful breakfast! Once the competitive spirit took over there was no stopping us. A melon bowl needed melon balls – but who has a melon ball scoop in their camping supplies? Hey, a measuring spoon will work, heh, heh, heh, they’ll never top this! The lovely melon bowl was filled with cantaloupe and watermelon, but now we would need something just as wonderful for the berries, hmmm, too bad we don’t have a tray. My mom quickly jumped into the competition and she pulled a blue serving tray out of her camping supplies!

We then sent Mom to pick some grape leaves and perhaps a few wild flowers to use as garnishments. We set the table with some lovely 4th of July themed paper plates, napkins and tablecloth. Our other team members were busy too – Noel just happened to have a pineapple which looked beautiful on our tray, she mixed our waffle batter, and she was really handy with a trash bag and kept everything neat and clean! Jim was in charge of the bacon which was cooked to perfection as well as the sausage!

By now the other team was starting to notice how awesome our breakfast was and they were getting pretty hungry (OK I have to admit that we may have lost a few points for timing because this much awesomeness takes time!) Once breakfast was ready we called everyone to our lovely buffet and stood back proudly as the other team enjoyed our beautiful and delicious breakfast. Waffles cooked to perfection, fruit, syrup and whipped cream along with perfectly cooked bacon and sausage patties. 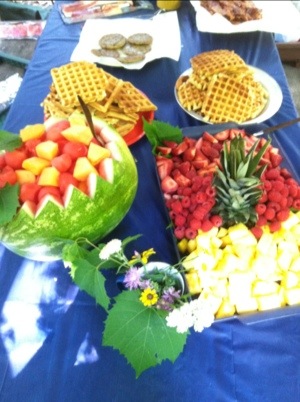 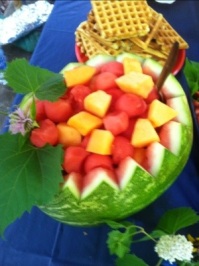 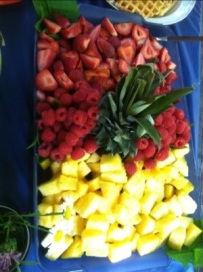 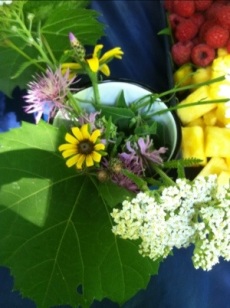 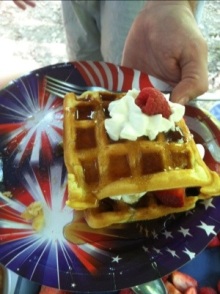 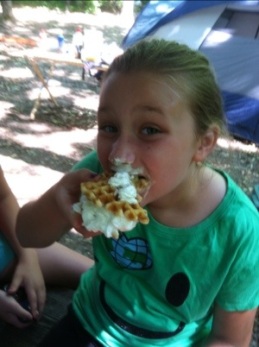 TEAM B
Later, realizing that their planned breakfast would never compare to ours, the other team called an emergency meeting to plan their defense. They were next seen driving off towards town on a secret mission. My team wasn’t worried and we felt nothing but pity for the other team because we knew they would have to work pretty hard to top our efforts. That evening some of the team members disappeared and their children said they were working on something for breakfast the next day.

In the morning I looked over to their campsite and saw them hard at work. Barb and I decided that as polite guests we should bring a hostess gift.  We gathered some flowers and artfully arranged them in vases (OK they were empty water bottles!) for each of the ladies on the other team. As we approached their encampment we were greeted by cute little servers wearing aprons with towels over their arms. 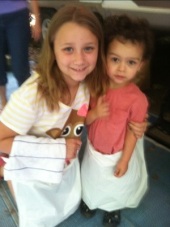 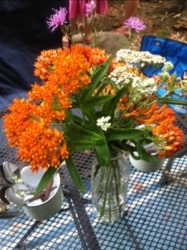 They began with a speech by one of our hostesses welcoming everyone. Then came my favorite part – Mimosas complete with little umbrellas! Their decor included bouquets of tissue paper flowers and their entire team was wearing aprons. Their breakfast buffet included muffins, donuts (with patriotic sprinkles) sausage, bacon, eggs cooked to order, and blueberry or chocolate chip pancakes. A noble attempt. 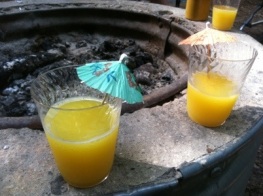 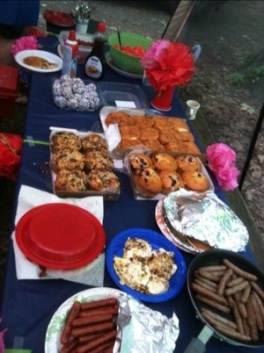 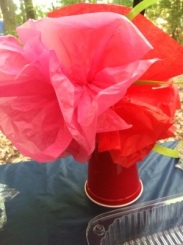 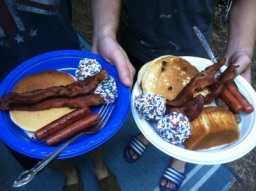 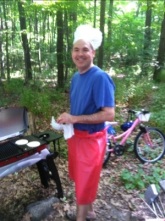 And the winner is?

Unfortunately there were no impartial judges. Perhaps you would like to help? Please cast your vote for either:

No matter who wins we all had fun and I think that a new 4th of July tradition has begun!

2 thoughts on “A Friendly Competition”